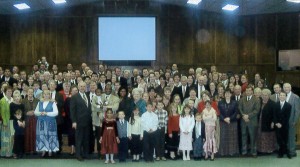 A group of people in a denominational church were seeking God for a deeper walk. In the summer of that year Rev. C.W. Goforth and his family came to hold a one-week revival. As an auditorium that seats 1,200-1,500 people filled to capacity for 6 nights every week, many lost souls were led to the Lord and the Holy Ghost moved in a way that had not been experienced in the region for many years. The scheduled one-week revival extended week after week for over 2 months and the city of Tyler was turned upside down by a powerful move of God!

During the revival, Friday nights were designated “Missionary Night” and guest speakers would preach and share the vision of their missionary ministry. One night a member of the congregation approached Brother Goforth and conveyed a dream the Lord had given him, regarding building a new Tabernacle for God’s people on the island of Haiti.

Brother Goforth immediately reached out to an acquaintance he had, from years past, who had ministered in Haiti, Brother Nick Gruick. Upon Brother Goforth’s invitation, Brother Gruick came to speak at Missionary Night and the vision of a new Tabernacle in Haiti was birthed. Brother Gruick’s message that night touched many hearts and God particularly spoke to Brother John Kennedy’s heart, compelling him to “follow that man”.

As the excitement swelled, planning for the new Tabernacle began. Drawings were prepared, funds were raised, materials were fabricated and shipped and 12 brethren from the church, (many of which are still with the church today), made the trip to Haiti and spent 2 weeks building the project. What the brethren on that trip did not realize was that during that two-week period, God had begun planting His message in their hearts. While the men worked during the day, Brother Gruick held Bible Studies each night and introduced the message of the Body of Christ to the 12 brethren. The men came back from Haiti with a new spiritual vision!

God dealt so strongly with Bro. Kennedy before and during the trip that he came back with a conviction to leave his job, sell his home and move his family to Haiti to live. During the 18 months the Kennedy’s were there, they learned to serve God’s people and blend their spirit with the churches of the Body of Christ in Haiti. The other men came back from the trip changed as well; led by Brother Gruick and with Brother Goforth as Pastor, a new church was established in Tyler.

The first church building was a rented truck garage known as “The Blue Barn” and the first service was held February 2, 1975. Brother Gruick visited often and began to connect the new Tyler church to Brother Clyde Patton and the Houston Assembly. As Brother Patton became acquainted with the Tyler people, he began bringing saints and ministers from the Houston church regularly on their bus and the Tyler church soon realized that they were becoming part of a larger fellowship, the Body of Christ.

16 acres of land was soon selected and purchased and a new building was constructed (which is the current location) with the first service being held on February 2, 1977. The first service in the new building was actually a Fellowship Meeting where several Texas churches attended. Soon after the church started, a school was opened with an emphasis on Christian Education. In 2004 the school expanded by building a new Education and Gymnasium facility and is still operational today.

In 1984, Brother Ralph Angelo became pastor of the Tyler church and brought a family history of the Body of Christ and a strong connection with the work in Haiti. Brother Angelo’s passion for Haiti was an immediate bond with the Tyler people and provided a means for the church to expand its ministry of building and serving God’s people. The men of the church made several work trips to Haiti under Brother Angelo’s leadership and continued to be involved with other churches around the Body of Christ helping design, construct and remodel many buildings for the people of God. Brother Angelo was committed to building the Body of Christ. In his last years, he was on the road constantly encouraging and strengthening churches. He was on another such trip to Orlando, Florida and Nassau, Bahamas when the Lord took him on October 13, 1998.

Brother John Kennedy served as Assistant Pastor under Brother Angelo and after the loss of Brother Angelo, Brother Kennedy transitioned to Senior Pastor and currently shepherds the church in Tyler. Expanding a vision that was planted over 40 years ago, Brother & Sister Kennedy have led the church in helping serve the Body of Christ all around the United States, Kenya, India and Haiti. Tyler Gospel Chapel currently has the responsibility of maintaining the accounting records for “Rebuilding Haiti Together” and “Mission Voice” accounts for the General Body. On January 10, 2010 a 7.0 magnitude earthquake shook the island of Haiti with estimates of over 300,000 lives being taken. Shortly after the earthquake, Brother Lyonel Joseph, one of the Elders in Haiti and Pastor of the Delmas 9 church called Brother Kennedy to report that many churches had been damaged and/or destroyed and the people were afraid to return to the buildings. Two brethren from the Tyler church with construction expertise made the trip to Haiti within two weeks and assessed over 100 church buildings.

The Delmas 9 building was Brother Joseph’s main church where over 1,000 people attend regularly and was the location where the monthly Minister’s Meetings were held. The damaged facility had to be completely demolished and temporary roof structures were constructed to provide a place for the people to worship. Brother Joseph had a vision to rebuild a facility that was not only a church to meet the local needs, but one that would accommodate a meeting for the Body of Christ, also a school and a medical facility that would be available for God’s people 24/7. The Tyler church has been the hub for coordinating the new Delmas 9 project and it now has become a reality: the concrete foundation and slab has been placed and 13 shipping containers of construction materials and supplies are on site in Haiti ready to start construction.

In 2002 the Tyler church was introduced to a group of saints in Kenya that many refer to as the Akorinos. Our relationship with Brother Ezekiel Karanja and Brother Johana Kamou has proven to be a very inspirational experience for the church. The Akorino’s have a very unique history in the Holy Ghost dating back to the early 1900’s with an experience referred to as the “Mercy Disease”, by those who witnessed it, as they observed their tears of great love, manifestation of speaking in other tongues and the miracles that followed them. Since the initial visit in 2002, Brother Kennedy, church brethren and families from Tyler have made multiple trips to Kenya to spend time in fellowship, prayer, teaching and worship with the dear brothers and sisters that the Lord has connected with Tyler.

Considering this year marks the 100th anniversary of the ministry of Bro. William Sowders, the Tyler church is relatively young by comparison, 41 years old at the time of this publication. However, the mountain tops and valleys that this church has experienced together, has proven the foundation on which it is built has withstood the test of time.